A new backpack which reduces weight force by86% could lead to a drop in backache in children, according to its creator.

He said the new invention could be an immediate application forbackpacks carried by schoolchildren, which he described as "a well-knowncause of musculo-skeletal injury".

He said a person carrying 60lb in a bungee backpack would use thesame amount of energy as someone carrying a load of 48lb in an ordinary one.

"It'slike carrying an extra 12lb for free," he told the journal Nature. 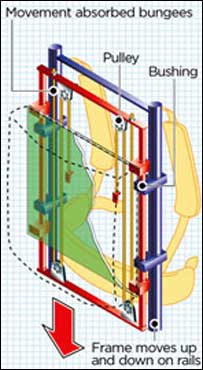 "Being able to move at relatively high speeds is crucial formany professions, such as firemen, first responders, disaster relief workersand police," he said.

"If you have ever tried to run with a heavy backpack, it isalmost impossible because of the large shocks to your knees and ankles."

The invention has been welcomed by a County Down pressure groupwhich campaigns for legislative change on the issue of children's schoolbags.

However, William Methven of Safety At School said the core problemhad to be addressed.

"If a new bag is being created, then that is great, but it isnot tackling the real problem," he said.

"The critical issue is that health and safety legislationdoes not protect children in schools, amazingly.

"Teachers can, and do, refuse to carry heavy weights, butlittle children are asked to carry weights in their schoolbags, which are oftenheavier.

"While I would welcome a bag which helps children, this istreating the symptoms and not the cause."

In 2004, she urged the introduction of new safeguards. 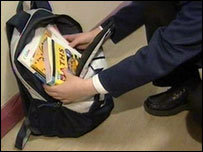 Many children suffer backache because of heavy bags

Lady Hermon decided to act after her son developed backache as aresult of carrying a heavy schoolbag.

The government said it was a matter for school authorities todecide what provision should be made at a particular school.

Parents had a responsibility "to protect the health andwelfare of their children by ensuring that only essential materials are carriedin schoolbags".

Mr Methven said that so far lobbying had "come up against abrick wall".